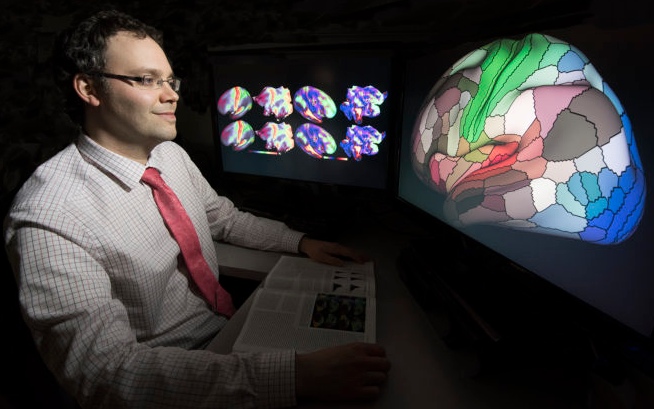 Major new work based on Human Connectome Project data and methods published in July 20 issue of Nature promises to be a boon to neuroanalysis research for years to come.

The study, A multi-modal parcellation of human cerebral cortex, led by Matthew Glasser and David Van Essen of Washington University, used information derived from structural and functional MRI data collected on 210 HCP subjects to create a new 180 region per hemisphere map of the cerebral cortex of the human brain. Further improvements to previous maps were achieved by using the multimodal surface matching algorithm pioneered by HCP investigators at Oxford U to precisely align the individual brains before analysis. Results were validated and the maps applied to individuals from an independent set of 210 HCP subjects.

Although the new map will be very important in raising the accuracy of work to delineate the connections between brain regions by the HCP and others, it will continue to improve as more, higher resolution data is added to the analyses.

“We ended up with 180 areas in each hemisphere, but we don’t expect that to be the final number,” Glasser said. “In some cases, we identified a patch of cortex that probably could be subdivided, but we couldn’t confidently draw borders with our current data and techniques. In the future, researchers with better methods will subdivide that area. We focused on borders we are confident will stand the test of time.”

and added in Nature:

“We’re thinking of this as version 1.0,” says Glasser. “That doesn’t mean it’s the final version, but it’s a far better map than the ones we’ve had before.”

The parcellation and Connectome Workbench scenes for each of the main article and supplemental figures are being shared in the new Brain Analysis Library of Spatial maps and Atlases (BALSA) database being developed by the Van Essen lab at Washington University.

The parcellation for use as a reference is most easily accessed in the Glasser_et_al_2016_HCP_MMP1.0_5_StudyDataset.scene study dataset.

Nature produced a video highlighting the work in the context of previous brain mapping efforts:

In addition to the article itself, Nature is distributing a wealth of supplemental information, as David Van Essen told the Washington University Record:

“We were able to persuade Nature to put online almost 200 extra pages of detailed information on each of the 180 regions as well as all of the algorithms we used to align the brains and create the map,” Van Essen said. “We think it will serve the scientific community best if they can dive down and get these maps onto their computer screens and explore as they see fit.”

The seminal work has also garnered much press:

Washington University Record: Map provides detailed picture of how the brain is organized

The Scientist: Mapping the Human Connectome

Popular Science: This New, Ultra-Detailed Map Of The Brain Could Change Medicine

Wired: A New Map of the Brain Redraws the Boundaries of Neuroscience